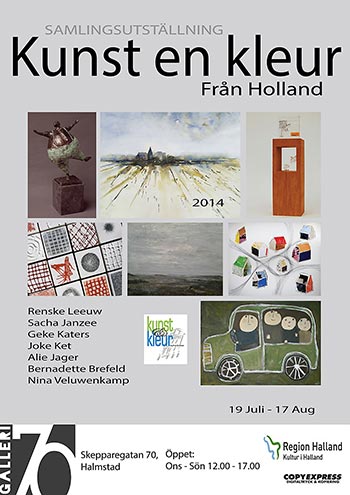 Renske Leeuw was educated as a goldsmith, but for several years she has focused on working with paper.
She uses all kinds of paper, from old newspapers and advertising leaflets to corrugated cardboard and handmade paper for her collages.
She likes working with paper, because it is an endless fragile, yet tough medium.

Renske finds her sources of inspiration both outside (the vastness of the landscape) and inside (the seclusion of a room).
Her work focuses on the boundary between these two worlds and gives the opportunity to look inside or to go outside.
The question that makes her work is always: ”what stays in and what should go outside?”
www.renskeleeuw.nl

Sacha Janzee started as a painter after graduating
Arts and Education at Windesheim University, The Netherlands in 1999 and was an art teacher at the same time.
In 2001 she moved to Marknesse, where she started her own home-based studio “Atelier Changer”.
When she started fusing glass, she quitted teaching to be able to spend more time creating her own language in this technique.

Sacha had several exhibitions in the Netherlands, Athens, Vienna and received a nomination in Emerge 2012.
About her work she tells: ”The main concept is that stories connect us with
other people, with the past and with the surroundings.
I tell a story that hasn’t been told yet.
My fables for example have recognizable animals, but also lines, drawings and
things that seemingly don’t belong there, asking for ones own interpretation.”
www.atelierchanger.nl

Geke Katers (1951) lives in Zwolle.
Her observing, omitting and adding creates a pure vision on nature,
whether it is National Park “de Weerribben”, were she lived for many years,
Sweden or Ireland. She catches sky, water and nature in watercolours
in a very personal way.
www.gekekaters.nl

Bernadette Brefeld
Visual artist Bernadette Brefeld (born 1964 in Haaksbergen) lives and works in Giethoorn, the Netherlands.
These last years she has mainly been painting human figures, reduced to their essence.
Her work is recognisable and accessible.
The spectator effortlessly fills in those details that Brefeld leaves out.
It’s not about the specific identity, but about recognising the situation,
the interaction and the emotions of the figures portrayed.
The fictitious portraits are often depicted with a sense of humour,
but always with an attentive eye.
www.bernadettebrefeld.nl

Joke Ket (born 1945) lives and works in Hurdegaryp, in the province Frisian, The Netherlands.
The power of her paintings is displayed flawlessly that atmosphere and emotions through color use.
Her work is a colorful palette over her travels far over the world.
Joke enjoys working in various techniques involving p.e. old newspapers,sand etc. plays a role in her work.
She has a great admiration for the women who walk miles with big heavy baskets on their heads
or plants rice with their children in the front , or on their back.
Women who by meager ingredients still try to make a meal. Women who have a lot less easy than we do.

A source of inspiration are also Joke Ket her landscapes from her beloved Frisian,
where she enjoys the peace and quiet and ensure a balance in her life and work.